Abstract: Orange peel is a cosmetic defect most commonly found on sheet metal components after forming.  This article discusses the causes of orange peel and engineering approaches for preventing it from occurring.

Orange peel is a cosmetic defect associated with a rough surface appearance after forming a component from sheet metal. It is called orange peel because the surface has the appearance of the surface of an orange.

During sheet metal forming the individual grains in the metal tend to deform independently of each other. Consequently there are differences in the amount of metal thickening or thinning between neighboring grains and within each grain.  As a result, the grains stand out in relief on the surface. The larger the amount of deformation and the larger the grain size, the more apparent is the effect. With a small-grained material, there is less variation in the amount of thickening or thinning between the grains and the individual grains are too small for the eye to detect the surface variations. 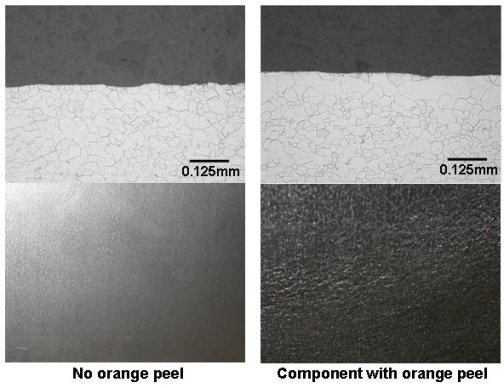 Orange peel can be prevented from occurring by identification of the maximum grain size that is tolerable for a component and implementing measures to prevent the grain size from exceeding the maximum identified.

Identifying the maximum grain size that can be tolerated without cause orange peel to appear requires engineering studies to compare the effects of different grain size on surface appearance and ability to easily perform the forming operation. This evaluation is required because there are competing requirements for appearance and ease of forming a component as large grained metal is easier to form compared to small grained metal. For many components there is usually a compromise grain size that will optimize formability and cosmetic appearance.  The grain size can be evaluated by cross-section metallography of the different samples according to ASTM E112 Standard Test Methods for Determining Average Grain Size.  The maximum grain size that does not cause orange peel is the desired grain size.

Alternatively, an engineering team can deep draw samples from a few different batches of sheet metal and measure the grain size for a sample from each batch. If there is any variation in grain size between the samples, the maximum grain size that does not cause orange peel is the desired grain size.  With this type of testing, it is possible that there is a larger grain size that can be tolerated than that identified. However, the testing is simplified compared to the first type of study mentioned.

Grain size is controlled through a combination of cold rolling and annealing. Obtaining the desired grain size requires proper control of the amount of cold rolling, annealing temperature, annealing time, and cooling methods after annealing (See Principles of Metallurgy). For the example that was shown earlier, the top surface of the sample with orange peel was not properly cooled after annealing, which allowed the grains at the surface to grow too large.