Why Temper Through Hardened Steel

Imagine you’re a warrior during the middle ages and it’s time to get a new sword. So, you go to a blacksmith to buy a sharp, shiny long sword. A few weeks later you’re in a battle, fighting at the front of the shield wall. You take a huge swing at the enemy, who meets your blow with his sword, and your sword shatters into several pieces. Unfortunately for you, your blacksmith outsourced a batch of swords to a blacksmith on the other side of town who didn’t have time to temper the swords. As a result, the swords were strong, but brittle. Their lack of toughness meant that they could not absorb much of an impact before fracturing. 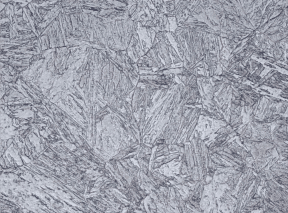 Tempering is used to improve toughness in steel that has been through hardened by heating it to form austenite and then quenching it to form martensite. During the tempering process the steel is heated to a temperature between 125 °C (255°F) and 700 °C (1,292 °F). At these temperatures the martensite decomposes to form iron carbide particles. The higher the temperature, the faster the decomposition for any given period of time. The micrograph shows a steel after substantial tempering. The black particles are iron carbide.

The amount of tempering required depends on the particular application in which the steel will be used. In some cases, toughness is not important, so tempering at a low temperature for a short period of time is acceptable. In cases where very strong and tough steel is required a high carbon steel tempered at a high temperature might be used.