Residual stress due to temperature variations

In parts cooled from elevated temperatures, residual stresses are caused by temperature variations in the metal during cooling. 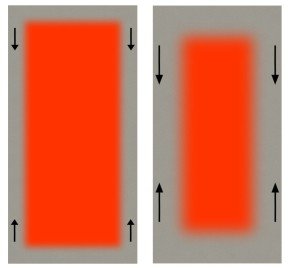 Cooling from elevated temperatures occurs during heat treating and welding.

Residual stress due to phase transformation

between the newly forming and initial  metallurgical phases.  The volume difference causes expansion or contraction of the metal. 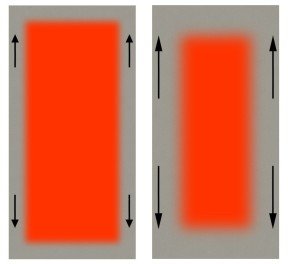 In some conditions, the volume changes can produce residual stresses large enough to cause plastic deformation, leading to component warping or distortion.  With severe quenching the quenching stresses can be so large that they cause cracking.

Consider a metal item that has been bent.  Regions adjacent to the bend will have been only elastically deformed, and this region

Controlling the type and magnitude of residual stress is important for applications in which components will be exposed to fatigue or stress corrosion cracking conditions or if the residual stresses are large enough to cause component deformation or cracking.  This can be achieved through mechanical treatment, stress relief heat treatment, control of heat treating processes, and alloy selection.

Mechanical treatments such as shot peening, light cold rolling, stretching, and small amounts of compressing are used to intentionally induce a compressive residual stress at the surface of a component.

From a component processing perspective, residual stresses can be minimized by using reduced cooling rates to reduce temperature variations and allow for phase transformations to occur more uniformly throughout a component’s cross-section.  Also, alloys can be selected that alloy for slower cooling rates to be used, while still getting the desired phase transformations to occur.  For example, for carbon steel components to be through hardened, low-alloy carbon steels enable the use of slower cooling rates compared to plain carbon steels.

X-ray diffraction is used for measuring residual stress nondestructively.  With this technique, strains in the metal’s atomic crystal lattice are measured, and the residual stresses are then calculated based on the strain measurements.