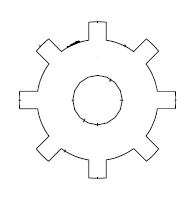 Project
Select the material to use for a 1/2-inch diameter, six foot long drive shaft used to run a power tool attached to one end of a pole assembly.  The drive shaft  cross-section is shown here.

Description
The main requirements for the shaft material were:

The most cost effective option to consider was extruded 6061 aluminum in a T6 temper condition. The Aluminum Association specification for 6061-T6 requires a minimum yield strength of 35 ksi.  6061 is a commonly extruded alloy that is less expensive to purchase and easy to extrude compared to other aluminum alloys that meet the strength requirement.

Material Evaluation Process
Part of selecting a material to use for a component involves the following steps:

Evaluating Prototypes
Prototype evaluation involved machining 6061-T6 rod stock into shaft samples.  Samples were tested using accelerated test conditions to simulate 3,500 hours use.  Two other aluminum alloys that had higher yield strength than 6061-T6 were also evaluated, just in case testing indicated that options were required.  The testing revealed that minor changes in the shaft cross-section dimensions were required to prevent failure before 3,500 hours.  Also, it was determined that 6061-T6 was suitable.  Since tooling for the shaft had not begun, the dimension changes were easy to make.

Supplier Evaluation
Evaluating suppliers did not require obtaining samples of the shaft, which was a good thing because the tooling needed to make the shaft would not have been ready until later in the development cycle.  Production samples of extruded 6061-T6 components that were similar to the shaft were obtained from two extrusion companies and were evaluated to see whether they met the composition and strength requirements for 6061-T6.  Metallographic examination of one sample from each supplier  was also performed to verify that the microstructure was correct.

One company’s samples were good.  The samples from the other company had strength slightly less than the requirement and a microstructure that was sub-optimum.  It was determined that the second company did not have the proper quality processes in place to ensure that shafts would have consistently met the strength requirement.  So, the company whose components did meet the strength requirement was selected as the product supplier of the shafts.

Later, when tooling for making the shaft was ready, samples were made and evaluated composition, strength, and microstructure.  Based on the results, some minor modifications were made to the extrusion process to get the desired microstucture and strength.

Conclusions
Performing the prototype and supplier evaluations discussed here revealed issues early in the product development cycle.  This enabled decisions that were easily implemented, and ensured that the development project stayed on schedule.

Michael is Principal Engineer and Trainer at Industrial Metallurgists, LLC. Reach him at mike@imetllc.com or 847.528.3467